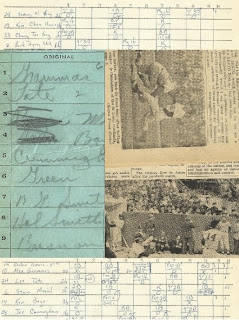 In October of 1958 the St. Louis Cardinals came to Korea and played a Korean team referred to as the Seoul All-Stars (全서울) or Korean All-Stars.  Tickets were sold for 2,000, 1,000, 500 or 300 hwan (Korean currency at the time), and according to the Korea Times a total of 1,500 reserved seats were made available for U.S. military personnel.

There is an article about this game in the Korea Times: St. Louis Cardinals played in Korea in 1958

Regarding the players for each team, there were some discrepancies between the English language sources and the Korean sources. Additionally, there were also discrepancies between some of the articles from the Korea Times and the score cards. I used Korean language sources for all the Korean names, except in the case of Kim, Hi-Yon, as the original Korean source was missing the second part of his given name. In this case I used the original scorecard information, but I also found Hi-ryon and Hi-yong as alternate spellings in other sources. For the romanization of the Korean names I used the official scorecard (which personally I don't like and if you can read Korean, will notice is not very accurate, although neither was the Korea Times). I followed the Korean standard of family name, given name for all Korean names in both Korean and English.

I really hope everyone enjoys the post and as always, if you have any questions or additional information, feel free to leave it in the comments section.
Posted by Patrick at 7:08 PM